You are reading
R.I.P. Gears of War Producer Michael Forgey Sadly today we are here to pay tribute to a great man, Michael Forgey. He was the producer of Gears of War 2, Kinect Adventures, Guardians of Middle-Earth, Middle-Earth: Shadow of Mordor, and had several other accomplishments in the gaming industry. Truly a loss for the gaming world. 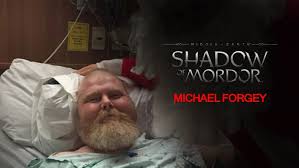 YouCaring.com posted the following announcement: “Mike passed away yesterday, March 3 at 3:15 am. His last few days were peaceful with his family by his side. Mike was so touched by everyone’s support during his fight. His family wants to thank everyone for their kind words and support during this difficult time.”

Though GT USA is a little late with this post, we still would like to show our condolences by featuring this great man in a post. Below are a list of some of Michael’s accomplishments. He was a busy guy! So lets pay tribute to his works.

Michael Forgey had been battling a rare type of cancer called called glioblastoma since May 2015. A NeoGAF user posted the last picture of him taken during Christmas 2015.

This is sad news indeed and a great loss. So Michael Forgey, GT USA salutes you for all that you have done for the gaming world. Your work will live on in your games and be enjoyed for many years to come. R.I.P. Michael Forgey.