Mega Man 7, known as Rockman 7: Shukumei no Taiketsu!  “Rockman 7: Showdown of Destiny!” in Japan, is a video game developed by Capcom for the Super Nintendo Entertainment System. It is the seventh game in the original Mega Man series and the first and only title in the main series to be featured on the 16-bit console. The video game was first released in Japan on March 24, 1995 and was localized later in the year in North America and Europe. The game is also available for the PlayStation 2, Nintendo GameCube, and Xbox as part of the Mega Man Anniversary Collection.

Picking up directly after the events of Mega Man 6, the plot involves the protagonist Mega Man once again attempting to stop the evil Dr. Wily, who uses a new set of Robot Masters to free himself from captivity and begin wreaking havoc on the world. Along with some help from his old friends, Mega Man finds potential allies in the mysterious robot pair Bass and Treble, who are later revealed to be in league with Wily. In terms of gameplay, Mega Man 7 follows that same classic action and platforming introduced in the 8-bit Nintendo Entertainment System (NES) titles, but updates the graphics and sound of the series for the more powerful SNES.

According to its creators, Mega Man 7 was only in development for a short time before its release. Keiji Inafune, a noted character designer and illustrator for the franchise, handed off his duties to Hayato Kaji for this installment. Mega Man 7 has received an overall average critical reception. Although many considered it a competent game by itself, a majority of reviewers either called it a simple rehash of previous entries in the Mega Man saga, or considered it inferior to the inventive spin-off Mega Man X, released on the SNES over a year earlier.

Taking place in the 21st century (the ambiguous year 2020), Mega Man 7 begins directly after the events of Mega Man 6. Thanks to the efforts of Mega Man and his friends, Dr. Wily was finally brought to justice. However, Wily had always known that he might be imprisoned one day, and so he had constructed four backup Robot Masters in a hidden laboratory: Burst Man, Cloud Man, Junk Man, and Freeze Man. If they did not receive any communication for six months, they would activate and begin searching for their master. After six months, the robots activate, round up an army, and go on a rampage throughout the city in which Dr. Wily is being held. Mega Man is called into action. Upon driving into the city with Roll and Auto, he sees that it is in ruins, and that he is too late to stop Wily’s Robot Masters from liberating the evil scientist. Mega Man gives chase, but is stopped by Bass, a robot with capabilities much like Mega Man’s own, and his robotic wolf, Treble. After a brief skirmish, Mega Man is informed that the two of them are battling Wily as well. Bass and Treble then take off, leaving Mega Man confused, but convinced that he has new allies and determined to again stop Dr. Wily’s plans.

After Wily’s Robot Masters are defeated, he dispatches four more to combat the protagonist: Spring Man, Slash Man, Shade Man, and Turbo Man. In one of the locations, Mega Man encounters an injured Bass and sends him to Dr. Light’s lab for repairs. Mega Man defeats the remaining Robot Masters and goes back home, learning upon arriving that Bass had gone berserk and had torn up the lab, escaping with parts for new enhancements Dr. Light was working on. Wily appears on the video monitor and reveals that Bass and Treble are actually his own creations, and that they only gained his trust in order to steal the parts. Bass’ apparent ambition is to best Mega Man in combat and prove himself as the strongest robot in existence. Mega Man makes his way to Wily’s fortress and defeats Bass and Treble, and then Dr. Wily himself. As usual, Wily begs for mercy, but after giving him six chances to change his ways, Mega Man chooses to finish off the mad doctor for good, and threatens him with his Mega Buster. Terrified, Wily explains that as a robot, Mega Man is prevented from harming humans; Mega Man counters that he is “more than a robot”. (In the Japanese version, Mega Man stands in silence.) Before Mega Man could do anything, he is interrupted when the fortress begins to self-destruct, and Bass and Treble arrive to rescue their creator at the last moment. Before escaping, Bass taunts Mega Man for his hesitation (“He who hesitates is lost”), vowing that he, Wily, and Treble will return to get their revenge. Mega Man then escapes the collapsing castle, contemplating the events that transpired, and returns home to his family. 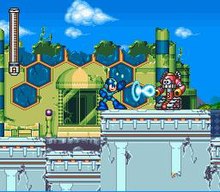 The player fires a charged Mega Buster blast at an enemy in the opening stage.

Gameplay in Mega Man 7 is mostly identical to the six previous games in the series. The player, as Mega Man, must complete a series of side-scrolling platform levels that typically end in a boss battle with a Robot Master. Destroying the Robot Master earns the player its special Master Weapon, which can be selected and used in all future stages. Each Robot Master is weak to a specific Master Weapon. Unlike the first six Mega Man games, only four new Robot Master stages are selectable at a time. After the player completes the introductory level, the first four Robot Masters in the list (Freeze Man, Cloud Man, Burst Man, and Junk Man) are selectable. After these are beaten, the player is taken to the intermission Robot Museum stage. When this stage is beaten, the other four Robot Masters (Slash Man, Spring Man, Shade Man, and Turbo Man) become available.

Mega Man 7 uses many of the same conventions introduced in previous installments, such as sliding along the ground, being able to charge the Mega Buster for more powerful shots, and calling on the hero’s dog, Rush, to perform various tasks. One unique feature is Rush Search, which causes Rush to dig up useful items wherever the player is standing. Certain stages contain the letters “R-U-S-H”, which, when collected, will grant the player access to the “Rush Super Adaptor”, a combination of the two enhancements introduced in Mega Man 6 with a powerful rocket-arm attack and jetpack for flying short distances. Defeated enemies found throughout each stage can give the player extra lives, items which refill health and weapon power, and special bolts. The player can visit “Eddie’s Cybernetic Support Shop” from the stage select screen, where these bolts can be spent on items and power-ups, a feature that originally debuted in the Game Boy Mega Man titles. The use of bolts and the purchase of items at a part shop would become a standard for the core titles starting with Mega Man 7. Other gameplay elements also exist, such as the player being able to obtain the robotic, helper bird Beat and Proto Man’s trademark shield.