Earthworm Jim is a 1994 run and gun platforming video game developed by Shiny Entertainment, featuring an earthworm named Jim in a robotic suit who battles evil. The game was released for the Sega Genesis in 1994, and subsequently ported to a number of other video game consoles.

It was well received by critics, and received a sequel, Earthworm Jim 2, in 1995. Fifteen years later, Gameloft developed a high definition remake for the PlayStation Network and Xbox Live Arcade, titled Earthworm Jim HD, in 2010.

The game plays as a 2D sidescrolling platformer with elements of a run and gun game as well. The player controls Jim and must maneuver him through the level while avoiding obstacles and enemies. The player can use Jim’s gun as a method of shooting enemies, or his head as a whip for whipping enemies. The whip move also allows the player to grab hold of, and swing from, certain hooks in the game. Some levels have additional requirements beyond merely getting to the end of the level. For example, the level “For Pete’s Sake”, involves making sure the computer-controlled Peter Puppy character gets through the level unharmed, which is accomplished by whipping him to make him jump over pits, and defeating enemies before they can damage him. Failure to do so results in Peter lashing out at Jim, taking away from his health.

Levels commonly culminate with a boss battle. The game incorporates a large variety of villains in the boss battles, including Psy-Crow, Queen Slug-for-a-Butt, Evil the Cat, Bob the Killer Goldfish, Major Mucus, and Professor Monkey-For-A-Head. Two villains made their only appearance in this game, Chuck, a junkyard man with a stomach bug, and Doc Duodenum, a crazed organ.

In-between most levels, a racing level called “Andy Asteroids” is played. Unlike the rest of the game, it places the viewpoint behind Jim. The player must direct Jim on his rocket, in a race against Psycrow, through a tube-like structure while collecting items and boosts and avoiding asteroids. If the player wins, the next level is started instantly. If the player loses, a special boss fight against Psy-Crow must be won in order to progress to the next level.

Other variations in gameplay occur over the course of the game as well, such as a competitive bungie-jumping and fighting level, and an underwater maze that must be traversed both within a timelimit and without crashing too many times. 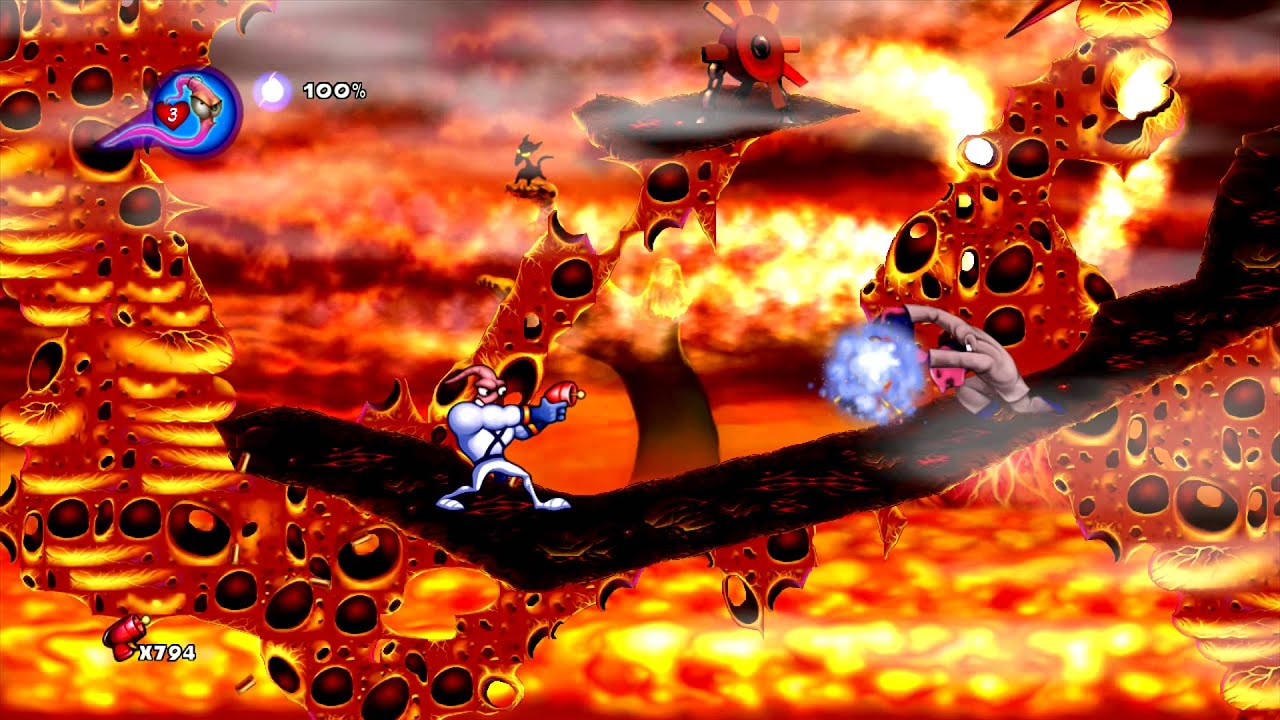 Jim is a normal earthworm, until a special “super suit” falls from the sky and allows him to operate much like a human, with his “worm-part” acting as a head and the suit acting as arms, body, and legs. Jim’s task is two-fold, he must evade the game’s many antagonists, who are after him because they want the suit back, and also rescue and protect Princess What’s-Her-Name from them. The game plays out with Jim eluding and defeating all enemies, and saving Princess What’s-Her-Name. However, not only does she not return Jim’s affection, but she is also crushed by the flying cow that was launched at the beginning of the game by Jim himself.