Driver (known as Driver: You Are the Wheelman in North America), is a 1999 action/driving video game developed by Reflections Interactive and published by GT Interactive Software for the PlayStation. It was released in North America on June 30, 1999; in Europe on July 2; and in Japan on March 9, 2000. It is the first game in the Driver series.

Initially, the game was released only for the PlayStation, but later, a Microsoft Windows port of the original PlayStation version was released in North America on October 11, 1999, and in Europe later on. In May 2000, a remake developed by Crawfish Interactive and published by Infogrames was released for the Game Boy Color. This version featured a top-down view, and fewer missions. A Mac port was released in North America in December 2000. The game was re-released on the PlayStation Network on October 14, 2008, and a remake developed and published by Gameloft, with voice acting and enhanced graphics, was released for iOS on December 8, 2009.

The game is played out in four cities: Miami, San Francisco, Los Angeles, and New York, each of which remain only partially faithful to the actual city layouts. The game was notable at the time of its original release insofar as the player was able to explore each city as an open world environment.

The game was designed to mimic 1960s and 1970s car chase films. The title and the general tone seem to be heavily inspired by the 1978 crime film The Driver, written and directed by Walter Hill, which itself was based on the 1967 French film Le Samouraï, written and directed by Jean-Pierre Melville. One of the most notable allusions to the film is the “Training” level at the beginning of the game, which is very similar to a scene in the film in which the driver (played by Ryan O’Neal) must prove his skills to his potential employers in a parking garage. The music, character design, and the cars themselves, are inspired by films such as 1968’s Bullitt and television series such as Starsky and Hutch.

The game features a “Film Director” mode, where a run can be replayed with cameras chosen by the player, and a “Quick Replay”, where the cameras are automatically selected.

Once the player has unlocked a given city in the main story, they have the option to drive around that city in open world mode. When a city is unlocked, several other modes also become available for play; “Pursuit”, “Getaway”, “Checkpoint”, and “Carnage” (only available in the Windows port). After the single-player mode game is completed, several cheats are made available to the player. Among them are skipping the garage-training mission, giving the car super speed (PC only), immunity to police cars, invincibility, or the ability to drive in Newcastle upon Tyne (where Reflections Interactive is based). 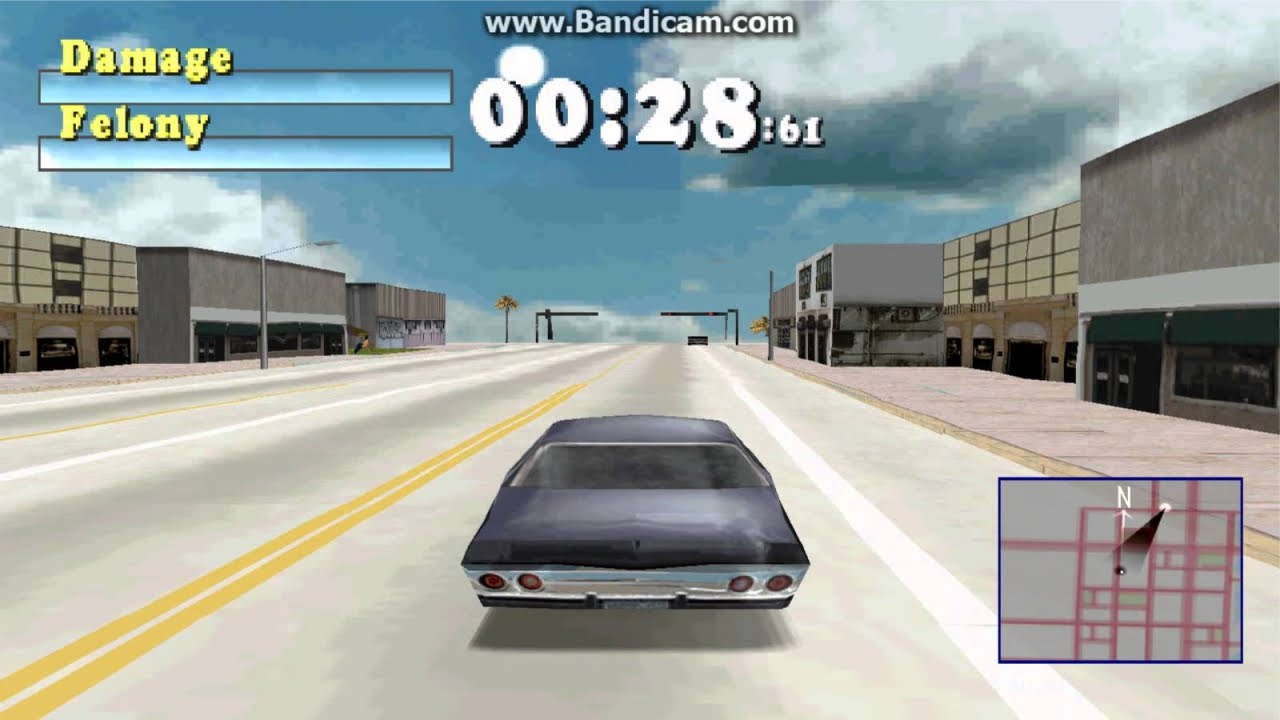 The game tells the story of John Tanner, a detective with the NYPD, going undercover in order to infiltrate organized crime by impressing the bosses with difficult driving missions (e.g., stopping and following another car, smashing through restaurants, delivering stolen cars, or scaring taxi customers). Tanner was chosen for this mission because of his unique driving skills, which he gained from his time as a racecar driver.

His undercover work begins when he must prove to some gangsters in a parking garage that he can do jobs for them by demonstrating his driving skills. Upon doing so, he is invited to his first mission, in Miami, Florida.

Tanner’s first mission is as the getaway driver for a bank job. Upon successfully carrying out this job, Tanner is then called upon to either drive a stolen car to a yard for a respray or help a gangster carry out an assassination. If Tanner takes the stolen car mission, he must then exchange a briefcase for a key, but he ends up being double-crossed and forced to chase the double-crosser across Miami Bay. If he takes the assassination mission, he must then clean up after a driver has left a stolen car out in the open.

Tanner then talks to a pimp named Rufus, who reveals that he is busting out an associate of his, Jean-Paul, from an armored police car. After this job is complete, Tanner either smashes a group of restaurants for a gangster who has found one of the owners has failed to pay protection money, or he drives an extremely fast car to safety for a gangster who needs it for a job. After this, Tanner is forced to pick up a supply of drugs for an operation.

Upon Tanner’s return from the drugs mission, Rufus is shot by his girlfriend Jesse, and Tanner chases her as she tries to escape in a monorail. He then turns her over to the police, and during her interrogation she gives up the name of an Italian-American man named Castaldi, who lives in San Francisco, California.

Tanner begins work in San Francisco with a casino job for some gangsters who have heard he is in town. After this, he meets an informant known as Mojo, who gives him information about who Jean-Paul is really working for, and a man named Rudi.

From here Tanner either aids in an exchange, drives stolen guns to a warehouse or aids in the robbery of a shopping mall. Following this, he meets a rival from his racing days called Slater. Tanner then either aids a gangster in scaring one of his former associates by taking him on a bumpy taxi ride, or takes heavy-duty explosives to an alleyway. If Tanner scares the associate, he then takes a local gangster to a waiting helicopter. Alternatively, if he takes the explosives across town, he then aids a group of gangsters left in the lurch in Chinatown.

Tanner then gets a phone call whereby he learns that Mojo has been kidnapped, and his captors want $10,000. They make Tanner work to save Mojo by forcing him to go to three phone booths in order to pick up instructions about where to go next. At the third phone booth, Mojo is saved and the money exchanged. Mojo reveals that Castaldi (Jean-Paul’s real boss) is working with a man called Don Hancock who is running for President of the United States.

Following this, Tanner is either set up by Slater and forced to evade cops as he heads home, or aids Castaldi in bringing one of his men to an underground car park for a meeting. By this point, the rivalry between Tanner and Slater has become too bitter, and when Tanner suspects Slater of spying on him, he frames Slater by smashing his car in a chase, which results in Slater getting arrested. Tanner then heads to Los Angeles to work directly for Castaldi. 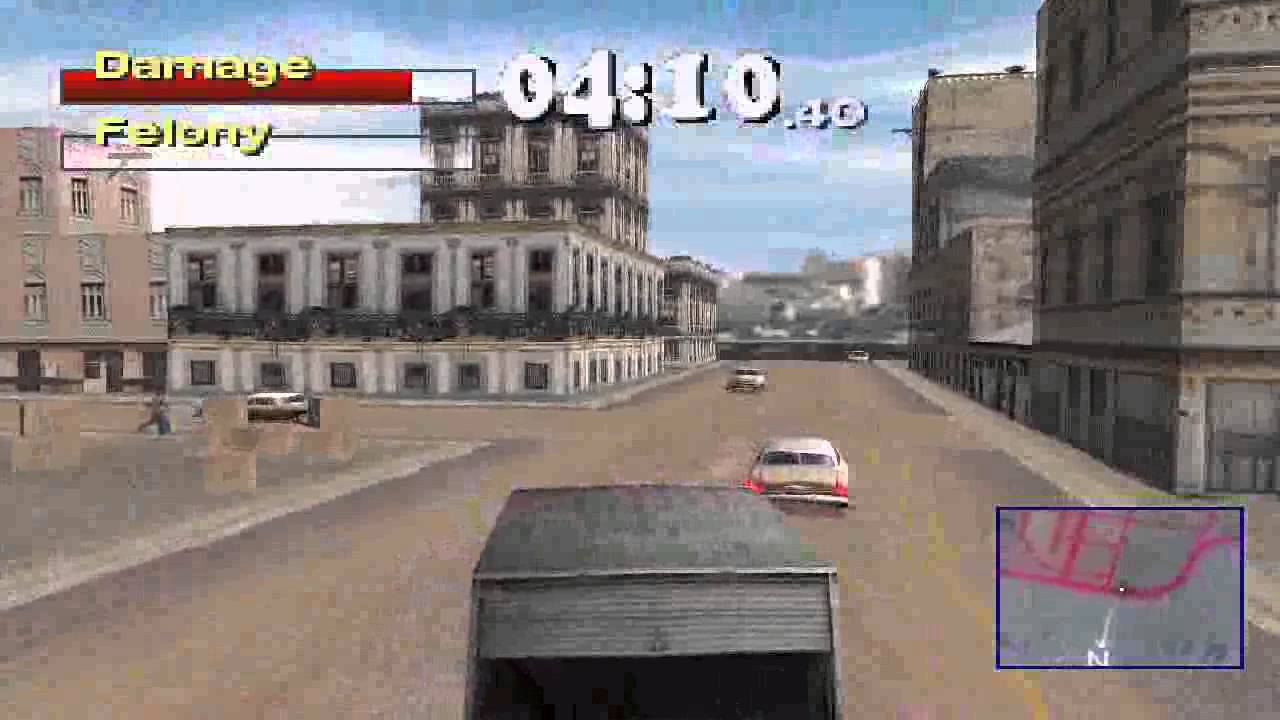 In LA, Tanner begins by either stealing a police car for Castaldi’s associates or bringing an associate to the hospital after he is shot. Following this, he either chases a double-crossing associate of Castaldi’s and smashes him off the road, or gets Castaldi’s girlfriend to a hospital after she has overdosed.

Tanner then learns of Castaldi’s real reason for being in LA; the assassination of FBI agent Bill Maddox outside Grauman’s Chinese Theatre. Tanner later meets with Leck, his police contact from New York, alerting him to the assassination attempt on Maddox. Tanner orders him to make sure Maddox turns up or otherwise his cover may be rumbled. He also warns him that there is an FBI leak which is giving information to Castaldi about Maddox. Tanner picks up the assassins and takes them to the Theatre, but the police spring an ambush.

Tanner flees the scene, taking the assassins to a safehouse near Los Angeles International Airport (LAX). The gangsters are convinced that Tanner, the newest and therefore least trustworthy member of the Castaldi Family was the one who tipped off the police, but he convinces them that it was Slater, who probably tipped them off during his interrogation in San Francisco.

Tanner then either rescues one of Castaldi’s men from a gangster called Granger, helps some associates escape from a Beverly Hills job or tests the effectiveness of a safehouse by driving to it.

When Tanner arrives back in New York he begins by either making a switch at Grand Central Terminal or taking a very damaged car to a scrapyard. Following this, he either takes control of a police car to thwart a bank job or gets some gangsters out of trouble after they have been pinned down by police. After Leck tells Tanner that his lieutenant, McKenzie, wants Tanner to abandon his undercover work, he either brings a cab home for further jobs or destroys a rival gangster’s main car. Next, Tanner has to either wreck a car to retrieve photo negatives, or destroy four cars before they reach Castaldi.

Tanner then meets with Leck, who again warns him that McKenzie wants him to come back in, as he is worried that Tanner’s cover will not hold up much longer. Tanner again ignores this advice, but tells Leck that he will let him know what Castaldi’s main goal is. Next, either Tanner’s lady friend, Ali, will call for help or Tanner goes through a “Rite of Passage”, told over the phone by Castaldi that if he does not beat Slater’s time across town, he is out of the final job.

Tanner then learns that the final job is a hit on the President, and Tanner is forced to ignore all of Castaldi’s instructions and take the President to safety. 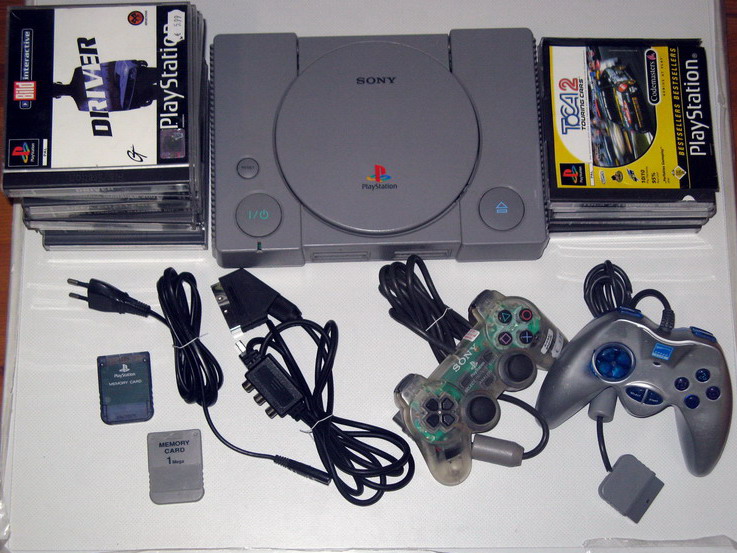 After saving the President, Tanner meets with McKenzie and another unidentified man, who congratulate him on his outstanding work. He informs Tanner that Castaldi, Don Hancock and the FBI leak are behind bars, and offers Tanner his badge back. However, Tanner is infuriated that the FBI and police could be involved in something like this. He refuses to take his badge back and starts walking out of the parking garage, with McKenzie yelling at him that this is his last chance. Tanner ignores him and leaves.

The game ends with Tanner driving in a jeep. Depending on which levels the player chose, Ali may or may not be riding with him.