Today a very special game launched 21 years ago. Chrono Trigger is known to many as the best RPG of all time. I consider it to be my favorite game of all times. Though I love FF7 also, to me there is no contest. So to pay tribute to this legendary title, lets take a look at some facts from Wikipedia, this awesome video by Final Fantasy Fan (^_^), and some cool Chrono Art.

Chrono Trigger is a role-playing video game developed and published by Square (now Square Enix) for the Super Nintendo Entertainment System in 1995. Chrono Trigger‘s development team included three designers that Square dubbed the “Dream Team”: Hironobu Sakaguchi, the creator of Square’s Final Fantasy series; Yuji Horii, a freelance designer and creator of Enix’s popular Dragon Quest series; and Akira Toriyama, a freelance manga artist famed for his work with Dragon Quest and Dragon Ball. Kazuhiko Aoki produced the game, Masato Kato wrote most of the plot, while composer Yasunori Mitsuda scored most of the game before falling ill and deferring the remaining tracks to Final Fantasy series composer Nobuo Uematsu. The game’s story follows a group of adventurers who travel through time to prevent a global catastrophe.

Square re-released a ported version by Tose in Japan for the PlayStation in 1999, later repackaged with a Final Fantasy IV port as Final Fantasy Chronicles in 2001 for the North American market. A slightly enhanced Chrono Trigger, again ported by Tose, was released for the Nintendo DS on November 25, 2008, in North America and Japan, and went on sale in Australia on February 3, 2009 and in Europe on February 6, 2009. The game was never released in PAL territories before the Nintendo DS version.

Chrono Trigger was a critical and commercial success upon release and is frequently cited as one of the best video games of all time. Nintendo Power magazine described aspects of Chrono Trigger as revolutionary, including its multiple endings, plot-related sidequests focusing on character development, unique battle system, and detailed graphics. Chrono Trigger was the third best-selling game of 1995, and the game’s SNES and PlayStation iterations have shipped 2.65 million copies as of March 2003. The version for the Nintendo DS sold 790,000 copies as of March 2009. Chrono Trigger was also ported to mobile phones, Virtual Console, the PlayStation Network, iOS devices, and Android devices.

Chrono Trigger features standard role-playing video game gameplay with several innovations. The player controls the protagonist and his companions in the game’s two-dimensional fictional world, consisting of various forests, cities, and dungeons. Navigation occurs via an overworld map, depicting the landscape from a scaled-down overhead view. Areas such as forests, cities, and similar places are depicted as more realistic scaled-down maps, in which players can converse with locals to procure items and services, solve puzzles and challenges, or encounter enemies. Chrono Trigger‘s gameplay deviates from that of traditional RPGs in that, rather than appearing in random encounters, many enemies are openly visible on field maps or lie in wait to ambush the party. Contact with enemies on a field map initiates a battle that occurs directly on the map rather than on a separate battle screen. Players and enemies may use physical or magical attacks to wound targets during battle, and players may use items to heal or protect themselves. Each character and enemy has a certain number of hit points; successful attacks reduce that character’s hit points, which can be restored with potions and spells. When a playable character loses all hit points, he or she faints; if all the player’s characters fall in battle, the game ends and must be restored from a previously saved chapter, except in specific storyline-related battles that allow or force the player to lose. Between battles, the player can equip his/her characters with weapons, armor, helmets, and accessories that provide special effects (such as increased attack power or defense against magic), and various consumable items can be used both in and out of battles. Items and equipment can be purchased in shops or found on field maps, often in treasure chests. By exploring new areas and fighting enemies, players progress through Chrono Trigger‘s story. 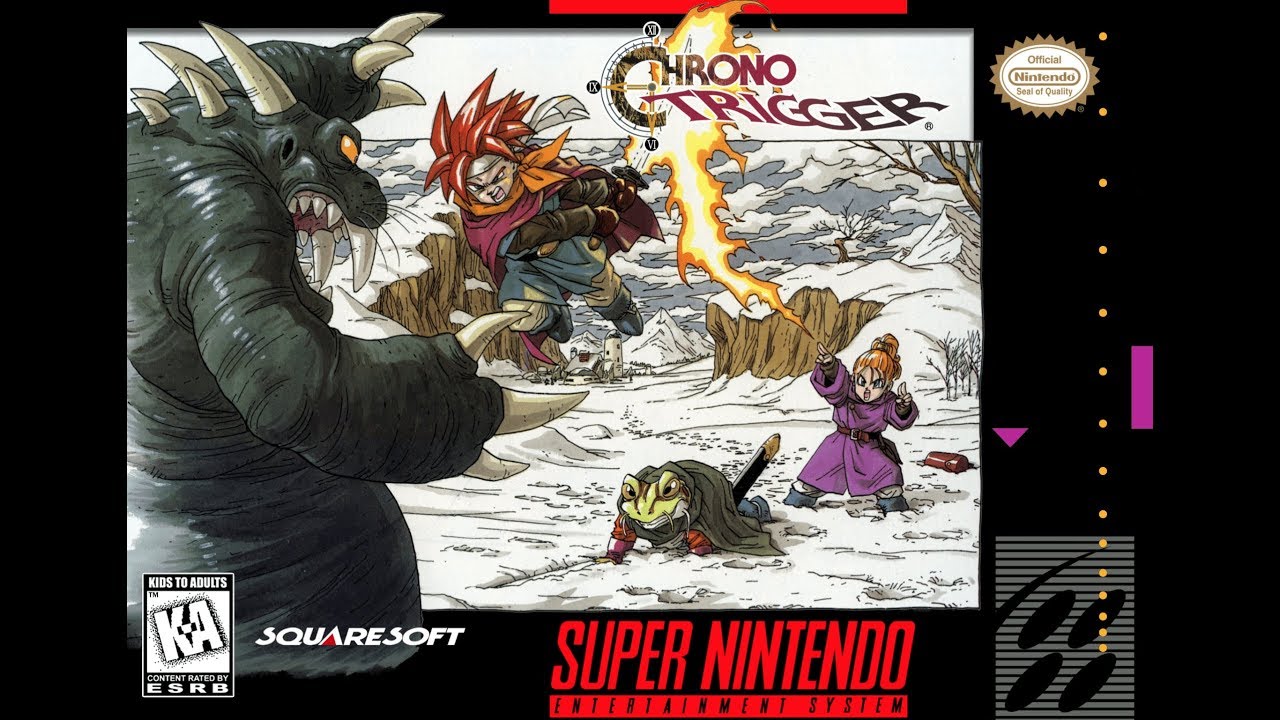 Chrono Trigger uses an Active Time Battle system—a staple of Square’s Final Fantasy game series designed by Hiroyuki Ito for Final Fantasy IV—named “Active Time Battle 2.0.” Each character can take action in battle once a personal timer dependent on the character’s speed statistic counts to zero. Magic and special physical techniques are handled through a system called “Techs.” Techs deplete a character’s magic points (a numerical meter like hit points), and often have special areas of effect; some spells damage huddled monsters, while others can harm enemies spread in a line. Enemies often change positions during battle, creating opportunities for tactical Tech use. A unique feature of Chrono Trigger‘s Tech system is that numerous cooperative techniques exist. Each character receives eight personal Techs which can be used in conjunction with others’ to create Double and Triple Techs for greater effect. For instance, Crono’s sword-spinning Cyclone Tech can be combined with Lucca’s Flame Toss to create Flame Whirl. When characters with compatible Techs have enough magic points available to perform their techniques, the game automatically displays the combo as an option.

Chrono Trigger features several other unique gameplay traits, including time travel. Players have access to seven eras of the game world’s history, and past actions affect future events. Throughout history, players find new allies, complete side quests, and search for keynote villains. Time travel is accomplished via portals and pillars of light called “time gates”, as well as a time machine named Epoch. The game contains thirteen unique endings; the ending the player receives depends on when and how he or she reaches and completes the game’s final battle. Chrono Trigger DS features a new ending that can be accessed from the End of Time upon completion of the final extra dungeon and optional final boss. Chrono Trigger also introduces a New Game+ option; after completing the game, the player may begin a new game with the same character levels, techniques, and equipment, excluding money, with which he or she ended the previous play through. However, certain items central to the storyline are removed and must be found again, such as the sword Masamune. Square has since employed the New Game+ concept in later titles, including Chrono Cross, Parasite Eve, Vagrant Story, Final Fantasy X-2, and Lightning Returns: Final Fantasy XIII. 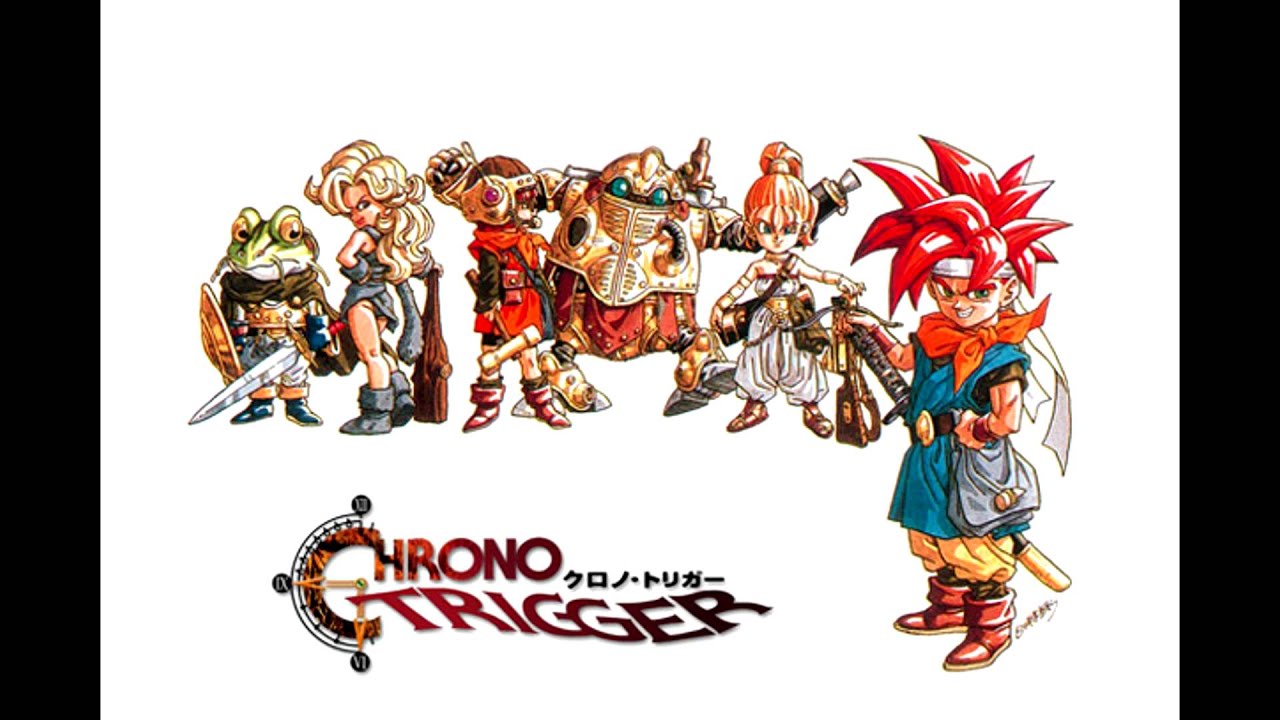